The file consists of newspaper articles and other related material.

Series consists of minutes of this committee of Council, which dealt with the administration of Ross Bay Cemetery. Includes the minutes of only one meeting, found filed and bound within the records of CRS 202 (Minutes of the Court of Revision on Local Improvements). The meeting pertains to the "removal of the remains of certain persons interred in Block 'D', along the line of the roadway under construction there, in connection with Ross Bay sea wall". 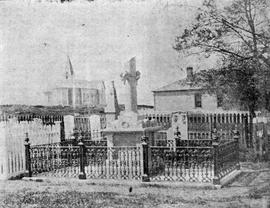 Corner of the Quadra Street Cemetery

Showing the Victoria District church in the background. This church burned in 1869 and was replaced by another designed by H.O. Tiedemann.

The documentation traces the history of ownership of various properties until they come into the possession of the Corporation of the City of Victoria.

The City acquired ownership of many of these properties for the purpose of rights of way for sewer, paths etc., the creation or extension of roads, or for public schools. City properties acquired for other purposes include the BC Agricultural Association lands at Willows in Oak Bay, the proposed cemetery at Ogden Point and Ross Bay Cemetery. Copies of various Crown grants such as the James Bay mud flats, Mt. Douglas and Beacon Hill Park are also included. 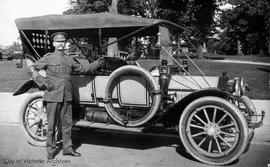 Fonds consists correspondence, a timebook, and other business records, as well as photographs of headstones.

Series consists of records of ownership and usage of burial plots in Ross Bay Cemetery.

There are five volumes in this series. Each volume contains the following data elements: block, folio, road, plot, name and remarks. The folio number refers to the page on which the name appears in the plot books (CRS 311), the name section shows what person is interred in each grave, and the remarks section contains notes on the transfer of plots, reserve plots, exhumations, re-interments, and depths.

The organization of the volumes reflects the layout of the cemetery, a grid system that uses alphanumeric designations for the blocks, roads, direction, and plots.

The blocks were owned by either a church or the City. For example, blocks A, B, and F where owned by the Episcopal Church, block C and D by the Catholic Church, blocks E, F, K, L, and M by the City, block G by the Wesleyan Church, and block H by the Presbyterian Church

Series consists of the City’s copy of burial permits.

Each permit originally consisted of three parts: the City copy, the family copy, and a receipt. Each permit is numbered and captures the following information: name, age, where born, where died, date of death, day and hour of burial, officiating clergy, block, plot and road, undertaker, reserve plots, and fees.

The earliest permits are contained in bound volumes and date from December 1886 to October 1915. In October 1915 the system was changed to a three-part carbon-copy form. And the data collected changed slightly to include cause of death, re-opening, interment, exhumation, and total cost.

Previous record keeping practices included licences for plots and perpetual maintenance contracts in the burial permitting system. While these records use the same numbering as the burial permits, they are distinct records series with their own access restrictions (see below).

The series consists of receipts for a contract for the maintenance of grass plots in Ross Bay Cemetery.

Each license consists of two parts, a duplicate that remained in the volume, and an original that was retained by the applicant. Each record contains the following data elements: license number, name, address, amount paid, location of plot(s) purchased, date, and the signatures of both the Secretary of Ross Bay Cemetery and the undertaker or purchaser.

The maintenance of grass plots was established by bylaw 2452 "Ross Bay Cemetery Grass Plots, Maintenance Fund bylaw, 1928" and adopted by a resolution of Council on29 April 1929.

Series consists of records of interments in Ross Bay Cemetery.

Series consists of occupancy records of burial plots in Ross Bay Cemetery. The series includes substantially the same information as that captured on the burial permit (CR-0235). Data elements include: permit number, name, age, where born, where died, day and hour of burial, clergyman, block and plot number, undertaker and remarks. The remarks section contains notes on the transfer of plots, reserve plots, exhumations, re-interments, and depths. A name index at the start of each volume gives a cross-reference to a folio in the volume.

The permit number system was not introduced until March 1884.

Series consists of receipts for licenses for plots in Ross Bay Cemetery.

Each license consists of two parts, an original that remained in the volume, and a duplicate original that was retained by the applicant. Each record contains the following data elements: license number, name, address, amount paid, location of plot(s) purchased, date and was signed by both the Secretary of Ross Bay Cemetery and the undertaker or purchaser.

Starting in volume 5, copies of “Application for a deed of cemetery plot” and correspondence are often attached to the license. The burial permit number(s) is noted on the license.

Fonds consists of correspondence and photographs of headstones. 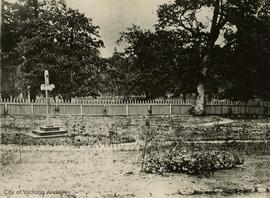