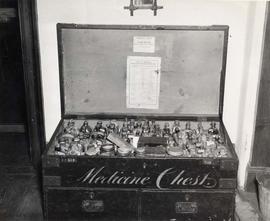 John Sebastian Helmcken, Jr., the son of Dr. James and Ethel Helmcken, was educated at Ontario’s Upper Canada College and served in the Canadian Expeditionary Forces during World War I. He became a doctor and lived in Santa Ana, California. Helmcken’s first marriage was in 1924 to Olive Brethour. He was later married to Julia McGill.

The collection consists mainly of photographs relating to Helmcken House, the opening of the Royal Jubilee Hospital, and the 15th Artillery Brigade CCF.